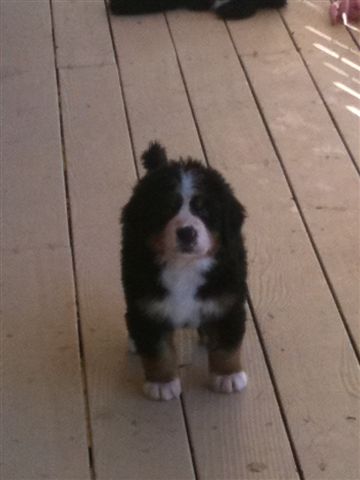 A new puppy is chaos and cuteness, sleeplessness and hilarity, doubt and wonder.  (As in, “I wonder what we were thinking when we got a puppy?”)

Lola was six weeks old in this photo, two weeks from joining our family.

My husband chose her because she was more feisty than her sister.

She played tug-of-war with our clothes when she first came to our house.  I’d have to pry her mouth open to save our clothes.  I have puppy-tooth holes in my jeans from those days.

But she was so cute!  When we took her for walks, strangers would take her picture and go crazy petting her.  It was like going out with a celebrity.  (In my mind, that’s what it would be like to hang out with Kim Kardashian or Tom Cruise.)

From needle-sharp teeth to a shark-mouth of slobber in a matter of months.

She likes to eat paper towels and any sort of human food left too close to the edges of the countertops.  I would tell you she eats her own poop, but you might be grossed out.  But I must mention that the other day she came into my office with kitty-litter encrusting her lips.

She’ll feign sleep in the mornings until I seem awake.  Then she greets me with two front paws on the covers and her dog mouth in my face.  This morning I played dead and so she jumped onto the bed.  It’s getting pretty hard to wrestle a 50-pound dog off the bed when she does not want to go.

She goes nuts when we return home from anywhere.

She’s afraid of the cat, with good reason.  Every once in awhile, the cat will chase her with unfurled claws.  The cat’s a little crazy.

She does not fetch.  So don’t ask.

Our puppy is a rowdy teenager now.  I don’t mean to wish away any time, but I can’t wait until she’s a lazy adult like me.

3 thoughts on “Whatever Lola wants”