I keep not writing here because I don’t have time to craft a beautiful blog post, one of those posts that make me feel like a real writer.  I check out the clock on the lower right of my computer screen and it’s already so late (past 1:00 AM) and I know how early I have to get up so I think, tomorrow.  Maybe tomorrow I will write.

But the problem is that every day is the same, even though it’s different.

So for tonight, I am going to just type awhile before going upstairs to finish the novel I’m currently reading.  (Gone Girl.  Yes, I’m very late to this party.)  I really should not read before sleep but I am so close to the end.  I’ll probably fall asleep turning a page, though.

Today my 11-year old and I went to Legoland after we dropped her 16-year old brother off to work at the employee gate.  One of his job benefits are a bunch of Legoland passes, so we took advantage of that even though a summer day at Legoland is a day full of toddler tantrums and heat and lines and very slow moving people who block pathways.  And did I mention the lines?  (I find toddler tantrums to be adorable, mainly because I no longer have a toddler, so I admire the tantrums without having any obligation to deal with them.)

We first went on the roller-coaster to see my son in action.  Before we got to the front of the line, my daughter chickened out.  She hates roller-coasters.  Then, on to the waterpark–the world’s most adorable waterpark, really–and I started reading while she went in the wave pool.  All too soon she was done and we left the waterpark area and had lunch and wandered through Miniland and then onto the Coast Cruise but then we were so hot.  Back to the waterpark we went.

I ended up sunburned despite my sunscreen.  Which is annoying.  I am developing a well-defined farmer’s tan.

Anyway, while we were eating lunch, I got a text-message from my son who was on his lunch break and it said this:

Mom, Nicholas Cage is here.  He just went on Technic.

What the what?  Technic is the roller-coaster where my son was working.  But he was on his lunch break . . . he noticed this guy with a VIP pass (an “old” guy, he said–Nicholas Cage is one year older than me) who was with a woman and two kids.  And then my son’s supervisor said, “Hey, did you see Nicholas Cage?” and my son realized he HAD seen Nicholas Cage.

So, there’s a Brush with Greatness.

Sunday night, I was working in my downstairs office when I heard a loud crash.  I ran from my office to investigate.  My son told me the noise came from my bedroom, so I opened the door and my husband–who had been asleep for a few hours–sat up and asked, “What happened?”

I thought maybe the pictures I’d hung in our bedroom earlier in the day had fallen.  When I flipped on the light, though, I found this (photo taken at 12:20 AM with my phone, so excuse the quality!): 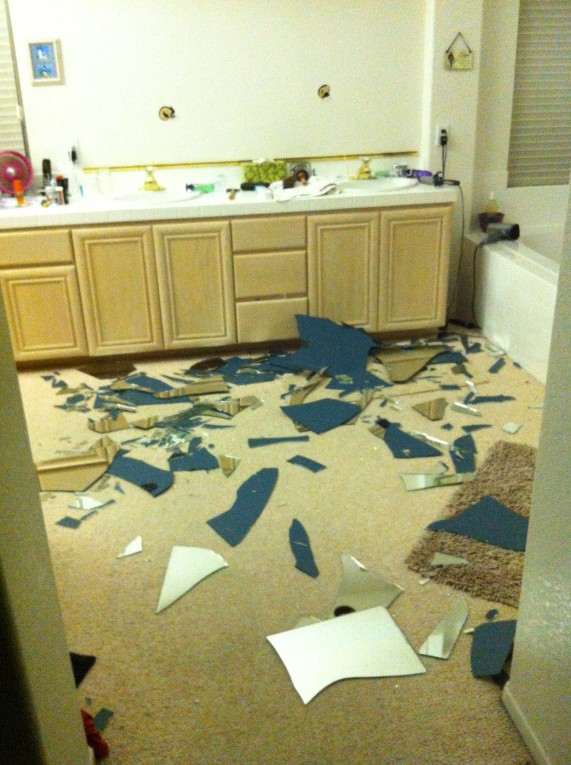 The 7 foot by 3.5 foot mirror from the master bathroom had simply fallen off the wall.  Eventually, I concluded that the installers had used too little mastic which had failed for no apparent reason.  And there were no clips reinforcing the mastic, though there should have been.  (I have been to Home Depot already to buy clips to reinforce my other mirrors.)

I cannot believe that the mirror fell.

Well, with that, I’m really going to bed.  My husband is out of town, so I have to get up a little earlier than usual to take two of my sons to work before I start my own job.