Sixteen years ago tonight, I was living in northern Michigan and I was over nine months pregnant.  Our twins were almost five years old.  My baby had been due on February 17th and there it was, February 25th.  I’d woken up in labor before dawn and spent the whole day breathing through contractions and trying to rest.  (I was really too excited to rest, though.)

The next day, February 26, my house would be full of midwives, their children and babies and helpful church ladies who were taking care of my children (who were almost five years old).

When my labor would stall, midwives would take me for a ride in a full-sized van that belonged to the midwife who was not Amish.  I’d wear my flannel purple nightgown covered by a coat and slippers.  The midwives had no pitocin, of course.  Instead, they’d plan to drive down bumpy country roads to kick-start my labor.

I think getting pulled over by the sheriff is what did the trick.  I was panicked, thinking I’d be ticketing for laboring in a van without a seatbelt.  It turned out the midwife driving the van knew the sheriff and he’d pulled her over because she was driving too slow on the county highway.  He didn’t seem to think it was weird that the midwife was transporting a panting woman in labor and a tiny Amish woman in a huge white van. (But what do I know, really?  I was focused on breathing in  2- 3- 4-5-6-7-8-9-10 and out 2-3-4-5-6-7-8-9-10.)

It’s always strange to know exactly what you were doing at a precise moment years earlier.  It’s mind-blowing to imagine the you that you were then seeing the you that you are now, sitting in a house in southern California, musing over how fast time goes and wondering–with a little fear and trepidation–about where you might be in sixteen years.  When I do the calculations and add up the years, I can’t even picture my baby boy as a 32-year old man. 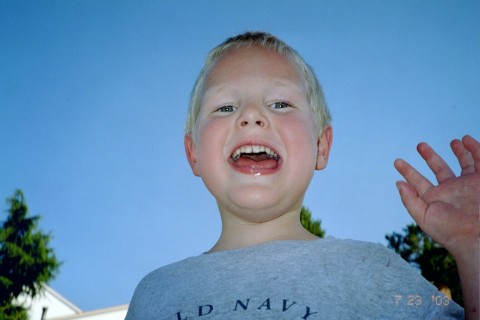 3 thoughts on “The birthday boy turns 16”