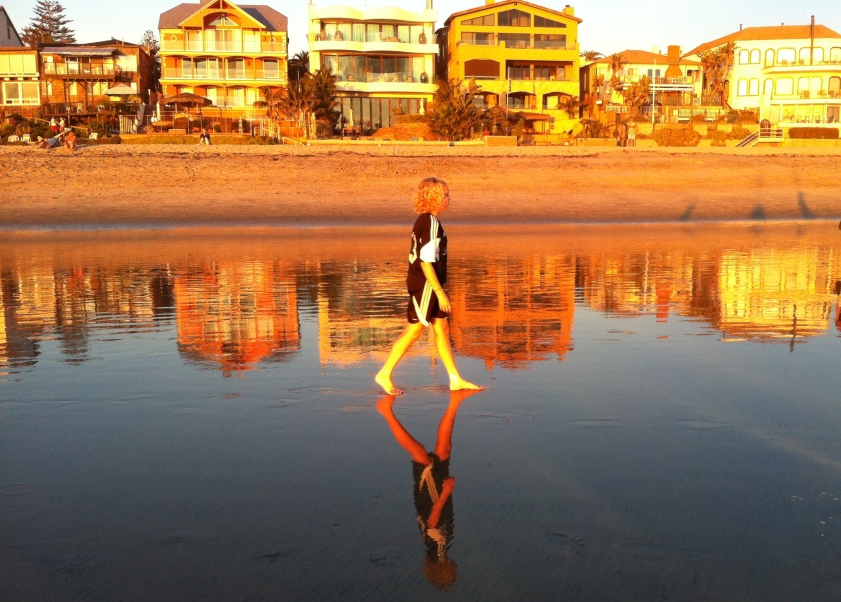 On a recent Sunday, my 11-year old and I spent most of the afternoon at a soccer-related event.

Afterward, I realized we’d have just enough time to catch the sunset, so we drove through town and found a parking place.

Except this particular time.  I had the mini-van angled in but as I pivoted my head around and around (like the Exorcist, exactly as you picture), a man’s voice came clearly through the open window:  “Nope. Not gonna make it.”

I agreed and wheeled out of that spot in shame and circled around some more until I found a stretch on a block with plenty of space to pull into.  This space also had no critics standing nearby to mock me.

Anyway, I parked and we hurried out, down the street and toward the stairs leading to the beach.  I expected the sunset to be spectacular because a wildfire had been burning nearby.  Did you know that smoke in the atmosphere can turn the sunset more intensely red?  (Something about debris in the atmosphere scattering the green and blue light, leaving just the red showing.)

Just as we were to cross the street, my daughter noticed a wallet-type purse sitting on the street corner.  I bent to pick it up, revealing a smart phone with a cracked screen beneath the wallet.  The wallet contained the owner’s driver’s license and what appeared to be a credit card and some other kind of card.  The phone seemed to be ringing without making any sound but I hesitated to answer it.  I noticed the icon said she’d had four phone calls.

My son called, so we drove down the highway to the movie theater.

I parked and walked down the street to the sheriff’s office but it was closed.

I looked at the phone and saw twelve missed calls.  I imagined that the phone’s owner in panic, calling her own phone, hoping someone would answer, hoping she could find it somehow.  I’m acquainted with that type of panic.

I thought I’d get home and then figure out what to do. The address on her driver’s license was local.  When I lost my driver’s license at the beach a few months ago, someone picked it up and turned it into the police department.  I received a letter in the mail telling me they had my property and after I called, they mailed it to me.

I picked up my son and then started to drive away.  I glanced at the lost phone and saw it was ringing yet again.  I answered it.  Fourteen missed calls.

Then, “I found your phone!”

She shrieked with relief and joy.  I circled back around, waited for her for ten minutes or so and then happily delivered her wallet and phone to her.  I was so happy to be part of the miracle that young woman experienced.  What was lost was found.

Amazing grace all around.

7 thoughts on “Lost and found”