Last Saturday, I set my alarm to wake up at 6:30 AM.  Getting up at such an hour is painful when you’ve gone to sleep only five hours earlier.  However, a sacrifice had to be made.

This is where I went with my daughter and our friend.  Notice the oh-so-cool surfer van at the bottom of the picture. 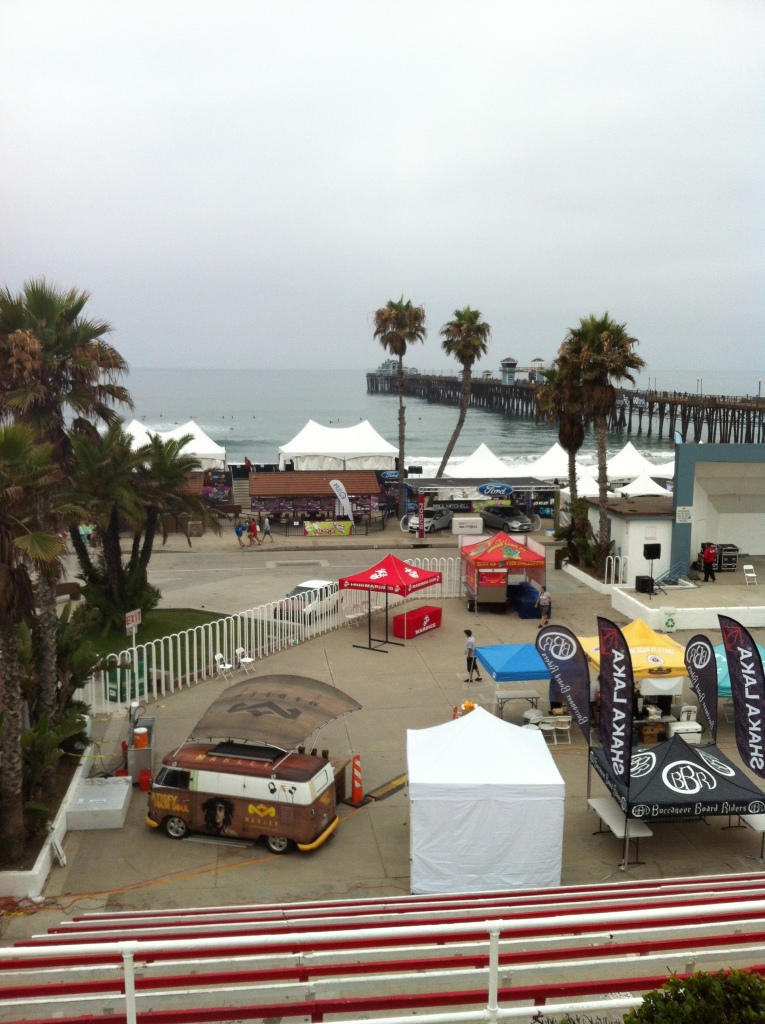 We arrived at the beach around 7:30 AM.  SEVEN THIRTY IN THE MORNING.  Oh my.  We found a parking place easily and walked down the stairs toward the beach.  And then we practically bumped into Bethany Hamilton, the surfer we’d come to see.  She had apparently finished warming up and was showering in the outdoor shower.  A man approached her to ask for her autograph as she finished her shower and headed toward us and I heard her say, “I can’t do that right now.”

My daughter and our friend and I looked at each other, mouths open.  “Did you see that?  That was HER!”  We were kind of star-struck, I admit.

Do you know who Bethany Hamilton is?  She’s the Hawaiian surfer who had her left arm bitten off by a gigantic shark while surfing when she was 13-years old. In the ten years since then, she’s continued her professional surfing career and been the subject of both a documentary and a major motion picture.

We set up our chairs and began watching the first heat of surfers.  Four surfers at a time had 25 minutes in each heat to surf as many waves as they could.  I’m not entirely sure how points are scored, but it was fun watching them catch the waves.

Then, as we sat waiting for Bethany’s heat, I turned my head in response to some commotion and saw her jogging in my direction.  I grabbed my camera just in time to snap her picture. 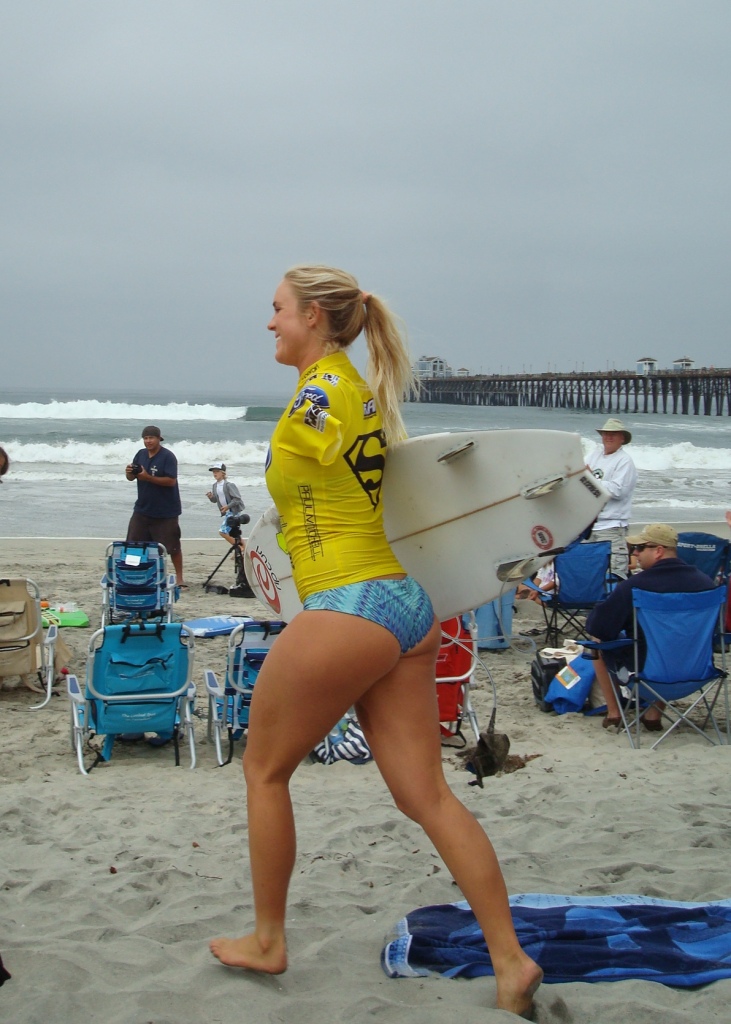 I couldn’t have planned that picture if I’d asked her to please jog past my chair in slow motion.

We had the best day.  In addition to watching the surfing, we had our hair braided and got free stuff and had lunch at Dairy Queen before watching more surfing.  More and more people joined us on the beach as the marine layer burned off and the hours passed.

All in all, it was a pretty great day. (I love the shirts the surfers wore – this was the Supergirl Pro Surf competition.) 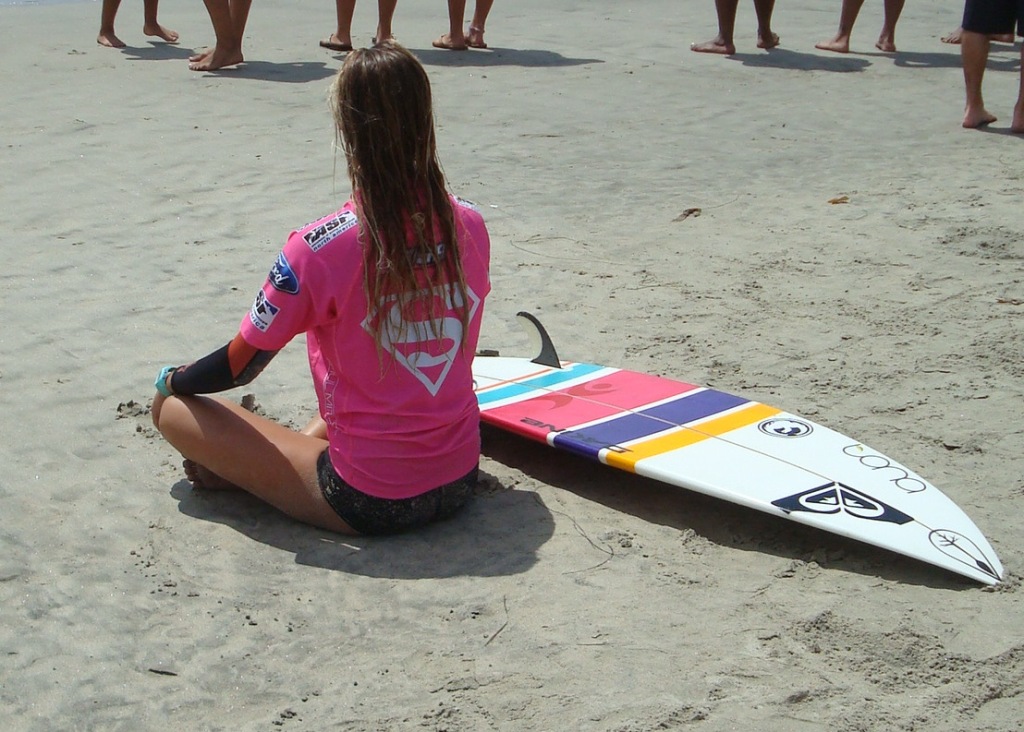 This is one of the professional surfers, preparing to surf.

And this is Bethany Hamilton, surfing while we all cheered and took pictures from shore.

And then she had to contend with the crowds when the heat ended.  I think she was lingering in the waves, waiting for the other three surfers to make their way through the crowd first.  All the surfers were mobbed for their autographs, but Bethany actually needed security to escort her through the crowds.  She was scheduled to sign autographs at 4 PM but we didn’t even attempt that since the line started forming by about 1 PM.  We heard that the day before she signed autographs in another town and some moms and their daughters waited in line for four and a half hours, only to be cut off when she stopped signing at the appointed time. 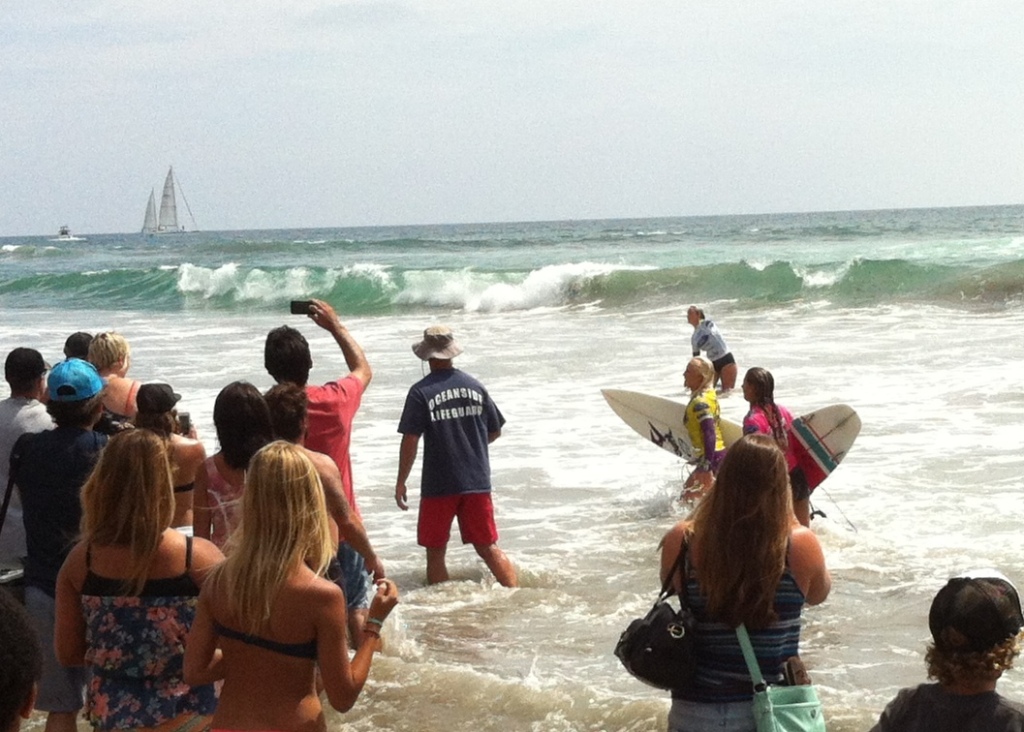 At any rate, we had an excellent time.  How much do I love living in a beach town?  (Answer:  A whole lot.)