Wednesday night at about 6:30 PM I was lying in bed, preparing to continue reading The Girl Who Stopped Swimming. Then my phone rang.

At first, no one replied to my “hello.”  I pressed the phone to my ear, repeating my greeting. The caller was identified by my iPhone as the mother of my daughter’s friend where she was spending the night.  I half-expected the voice to be my daughter’s.

Finally, though, the mom’s voice came over the line.  “We’re at the beach,” she said, and then she added the phrase, “Um, first of all, she’s okay.”

Why, when you hear those words, do you picture a dismemberment or maybe an explosion?  You don’t?  Oh, maybe that’s just me.  I did not find comfort in “she’s okay.”  I wondered why she was calling to tell me my daughter was okay . . . and what was all the noise in the background?

Then she told me that my 10-year old was stung by a stingray.  A stingray!  Hello?  A stingray killed the Crocodile Hunter!  But . . . my daughter was okay.  Or so she said.

And then, she said they were with lifeguards and could she call me back?

As soon as we disconnected, I told my husband what happened and then I did a Google search and found these scary instructions:

5. Go to a Hospital Emergency Room

So I found my shoes and prepared to drive to the beach so I could rush my daughter to a clinic for medical care.  Meanwhile, my husband called a doctor friend to ask his advice.  I drove to the beach, expecting the phone to ring any second.  I reached the beach and still hadn’t heard back, so I called my friend to see where exactly they were.

She gave me more details and put me on speaker phone with the lifeguard while she asked him questions.  Everyone sounded remarkably calm, nonchalant, even.  He said that she was fine and there was little chance a barb was still stuck in her.  She was stung on the hand and it had already been treated, cleaned, and bandaged.  I talked to my daughter and she sounded cheerful and perfectly okay.  She also sounded horrified that I planned to take her to the Urgent Care Clinic.  She wanted to spend the night with her friend as planned.

So, with assurance from her, the lifeguard and the mom, I relented.  I dropped off the extra clothes I’d brought at their house (they were not yet home from the beach) and began driving toward home.

Then I noticed the sky.

I called my husband, told him I’d decided to stay for the sunset.

And so I detoured into a parking lot, walked across the sand and got a front-row seat.  The beach was nearly abandoned.  I guess most tourists have headed home since school’s starting soon. 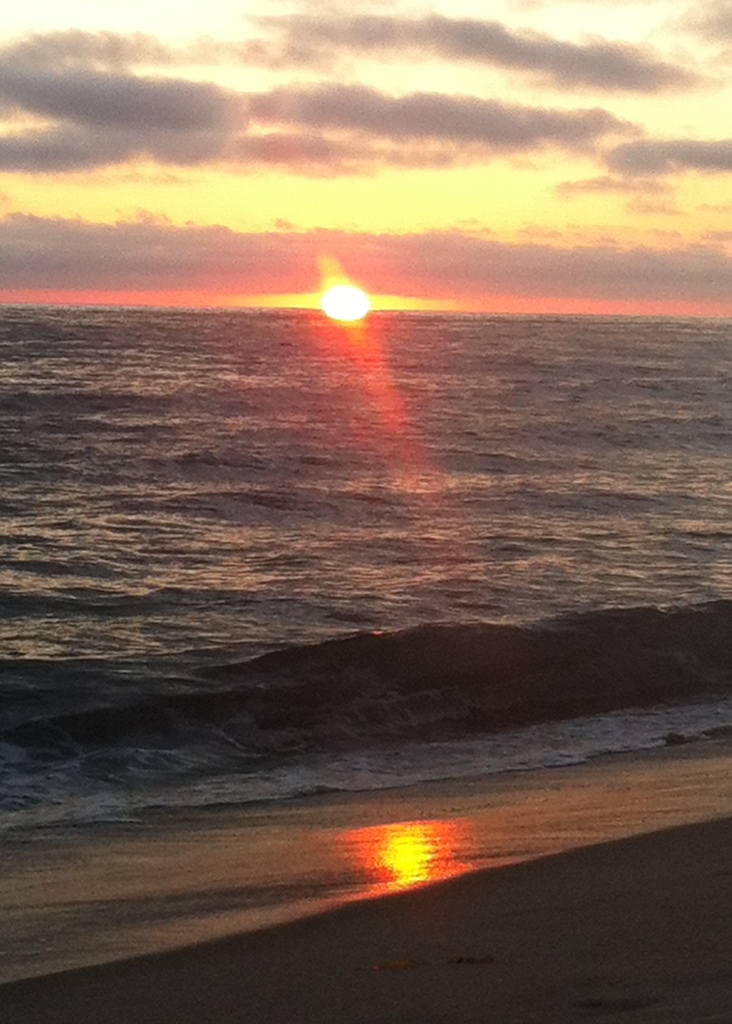 I only had my iPhone with me but at least I had it so I could snap photos.

As for my daughter, she declared she never plans to go to THAT beach again.

Today, she wore gauze wrapped around her two fingers.  When I suggested that band-aids might be adequate for the two small cuts, she said, “But Mom, that would not be dramatic enough!  I want people to ask me what happened!”  (She also told me today that she quite enjoyed having the lifeguard truck with its sirens and lights drive down the shore to transport her to the lifeguard headquarters for treatment.)

And it ended very well.

4 thoughts on “From crisis to serendipity”